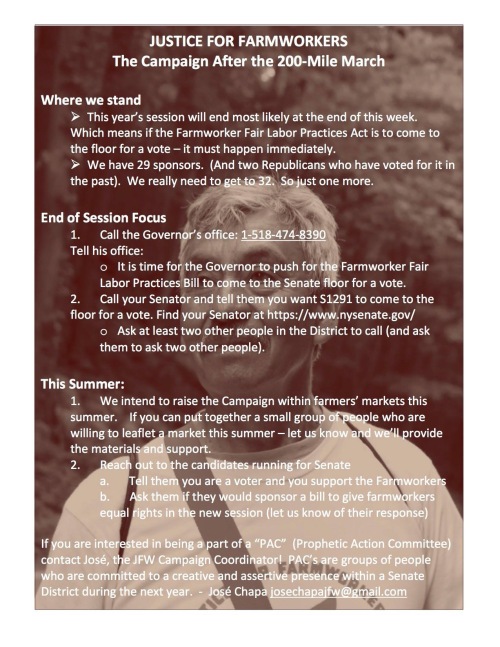 With both the March for Farmworker Justice and Farmworker Albany Day behind us, here are a few thoughts and action steps:Where we stand today:
This year’s legislative session will most likely end this week. If the Farmworker Fair Labor Practices Act is to come to the Senate floor for a vote, it must happen immediately.
We have 29 sponsors (and two Republicans who have voted for it in the past). We really need to get to 32 – one more – and there are a couple likely candidates. That being said, the reality remains the same: the Bill is being blocked from coming to the floor in the Senate. Even if it gets to 32 votes, the leadership is still likely to block. However, we need to keep pushing, as we never know.
Things we can do this week:
Call the Governor’s office (1-518-474-8390) to say, “It is time for the Governor to push for the Farmworker Fair Labor Practices Bill (S. 1291) to come to the Senate floor for a vote.”
Call your Senator to say you want to Bill to come to the floor for a vote this week.
Ask at least two other people in your District to call (and ask them to ask two other people).
Things we can do this summer:
We need to continue to raise pressure and build support. We intend to raise the Justice for Farmworkers Campaign within farmers’ markets this summer. If you can put together a small group of people who are willing to leaflet a market this summer, let us know and we’ll provide the materials and perhaps even one of our interns can join you!
Reach out to the candidates running for Senate:
Say you are a voter and that you support farmworkers
Ask if the candidate would sponsor a bill to give farmworkers equal rights in the new session (and let us know of their response).

It is time for action! Today, call Governor Cuomo and your local Senator.
1. Call the Governor’s office: 1-518-474-8390
Tell his office:
o It is time for the Governor to push for the Farmworker Fair Labor Practices Bill come to the Senate floor for a vote.
2. Call your Senator and tell them you want S1291 to come to the floor for a vote. Find your Senator at https://www.nysenate.gov/
o Ask at least two other people in the District to call (and ask them to ask two other people).